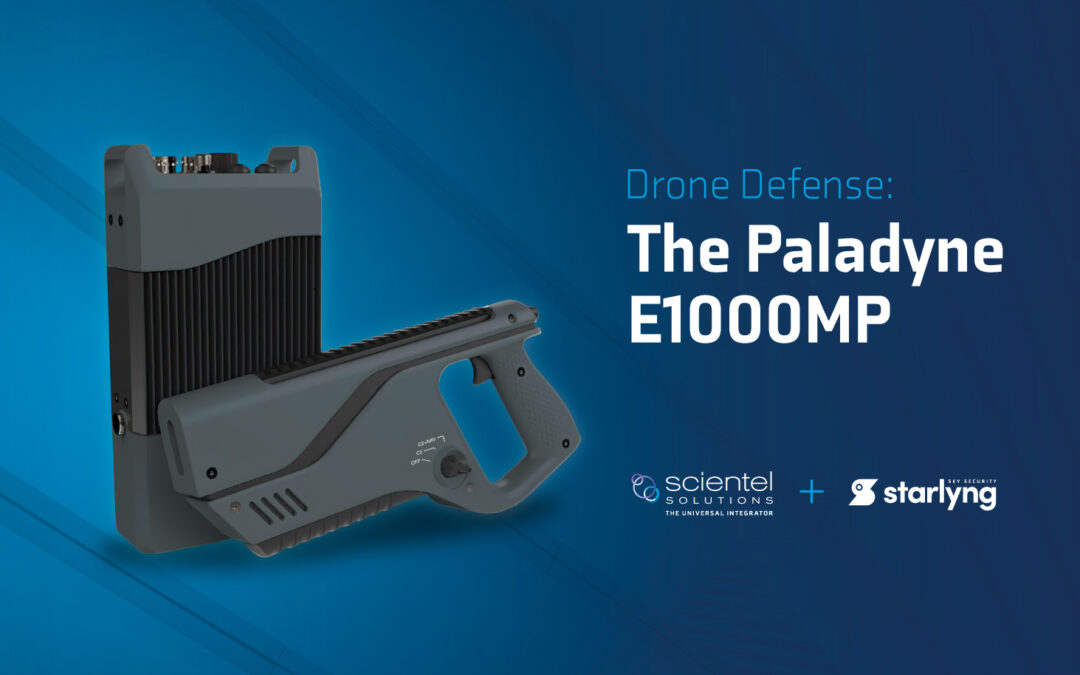 Drones increased over 60% in 2021. As drones become more popular for the everyday consumer, they become more dangerous for businesses and corporations.

Drones can disrupt large venue events, be used in cyber-attacks, and interfere in commercial/private flight paths. For instance, on July 16th, 2020, a modified Mavic 2 attempted to attack a power grid in the United States. As drones become increasingly available, threats like this only become more common. To defend against the rise in drone attacks, Scientel has partnered with Starlyng Sky Security to develop solutions including the Paladyne E1000MP.

The Paladyne E1000MP is a lightweight, versatile drone protection solution that is designed to be easily integrated into existing security procedures. The system operates as a handheld radio frequency (RF) device, which can send out bursts of RF or a continuous wave of RF to mitigate threats. By releasing 10-Watt RF signals, the E1000MP can disrupt the connection between the drone and the controller. This will cause the drone to either land or return home.

The E1000 boasts a sizeable range of potential scenario uses. The device can be used on large yachts for events, cover venue spaces for public outings and sports, and protect the information for private businesses/estates. Backed with a NATO military-approved battery specification, the E1000MP has a 2-hour operational time, which allows for easy mobile transportation. Most drone case scenarios will involve a drone flying over restricted air spaces (which can be considered trespassing and is a punishable offense) and disrupting daily procedures. Once a drone is spotted the E1000MP can easily defeat a drone that is within operational range.

On top of being compact and mobile, the E1000MP is also fairly simple to operate. With a functional distance of 1km, all a user has to do is plug the directional antenna into the battery pack, select their desired setting, aim and shoot. Once the device is fired users will want to continue to point the E1000 at the drone until it has either landed or has started its return process. If the user stops operating the E1000 early the controller may attempt to reconnect to the drone, so the user must continue to operate the E1000 on target until the threat is eliminated.

Though pilots can range from recreational flyers to terrorists, it is easy for all drone users to fly over a large group of people or invade a corporation’s airspace. It is critical for the safety of your data, customers, and assets to take precautionary steps to have a clear, drone-free airspace. Integrating the Paladyne E1000MP is a great first step in meeting that need. To learn more about the Paladyne E1000MP a full usage and training video can be found here.